Electric cars: why should you consider buying one?

Whenever the topic of electric cars comes up in conversation, you might be hard pressed to find someone who’s eager to buy one solely out of environmental concern. Pippa and Rupert Crispin from Buriton have made the switch to a Nissan Leaf and share their experience with us.

Typically, when you ask people if they would like to buy an electric car, their gut reaction tends to almost exclusively be: “Oh well, I can’t afford an electric car.”

Yes – even at the latest Buriton Green meeting, which proves just how much affordability is a key issue for most British consumers. What you can also find is that people seem to look for reasons why they couldn’t even contemplate such a change. It’s almost as though they want you to give them figures that are so outlandish they can simply deny it as a possibility!

In fact, this very behaviour is backed up by research. In the Tackling Change Climate Report commissioned by Smart Energy GB in September last year, they found that ‘green’ motivations alone are unlikely to drive substantial behaviour change. Rather, a wider set of compelling motivations must be communicated in order to encourage a change in consumers behaviour, as you can see below. 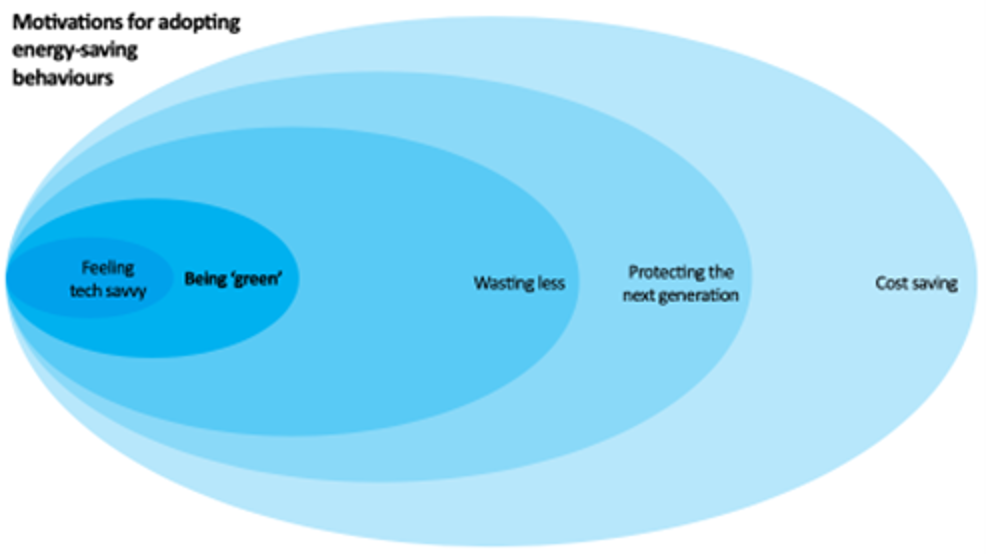 By far, they found that the biggest motivation is saving money. This is followed by a desire to protect the planet for future generations, and then by an inherent motivation to waste less. Only a small minority are motivated to adopt new behaviours by the desire to feel tech savvy.

This means when we’re discussing electric cars, we need to be thinking: how can we frame buying one as a way of saving money first, and then helping the environment second?

So, instead of pushing the narrative that it’s greener to buy an electric car and that this alone should be your primary motivation, let’s dispel some myths around the costs of buying one, and highlight the money-saving motivations for making this change.

Initial costs are higher, but not by very much in the used car market

Let’s use an example to demonstrate. Compare a used small/medium sized electric car with a used small family petrol car – in fact, let’s take a really small one like a Mini. Three-year-old Mini’s are on sale for around £12,000 at the moment – yes, really. If you compare this to a used, top-spec Nissan Leaf, you would pay £13,500 on average.

This is a difference of £2000 and likely less if you opt for a normal spec Leaf. But to keep it simple let’s go with £2000. In the overall scheme of things, this isn’t a huge difference when it comes to buying a car, especially when you take into consideration the running costs and long-term costs. And when you factor in other considerations like salary sacrifice schemes, the cost goes down even more.

Running costs are significantly lower than petrol and diesel cars

If you add to that the saving on road tax (around £200) – that’s a saving on running costs of around £920 per year! In the backdrop of motorists being warned to expect further rises in price, with the current price already breaking the record high for petrol costs in the UK, buying an electric car looks like a promising way to offset these costs. As we will look into next, there are other long-term saving options which makes buying an electric car more appealing.

Although the initial costs are higher for a used electric car than a used petrol or diesel car, being an electric car owner means you could save about £1000 per year after the first 2 or 3 years and taking account of rising fuel costs. The average age for a car in the UK is 8.4 years. So over the next five years  – assuming the car doesn’t pack up –  that’s a £5000 saving!

Added to this, electric cars have many other money-saving elements too. For example, did you know that research shows you can save as much as £1,037 on your annual bills if you charge your electric car during off-peak hours? Not to mention, if you have an electric car you can expect lower maintenance costs, be exempt from congestion charges and be entitled to free parking in some areas.

The bottom line is: being an electric car owner can save you money in the long run and help the environment

With an ever-growing second-hand market, buying a used electric car can be the logical next step if you’re looking to stray away from used petrol or diesel cars. The fact is, buying an electric car is no longer something only people like Elon Musk can afford. It’s becoming more and more accessible and it really doesn’t have to break the bank. At the same time, you’re also saving carbon emissions by cutting your fossil fuel use. So if you’re greeted with the “I can’t afford an electric car” response, these are arguments to change this to a positive, I hope.